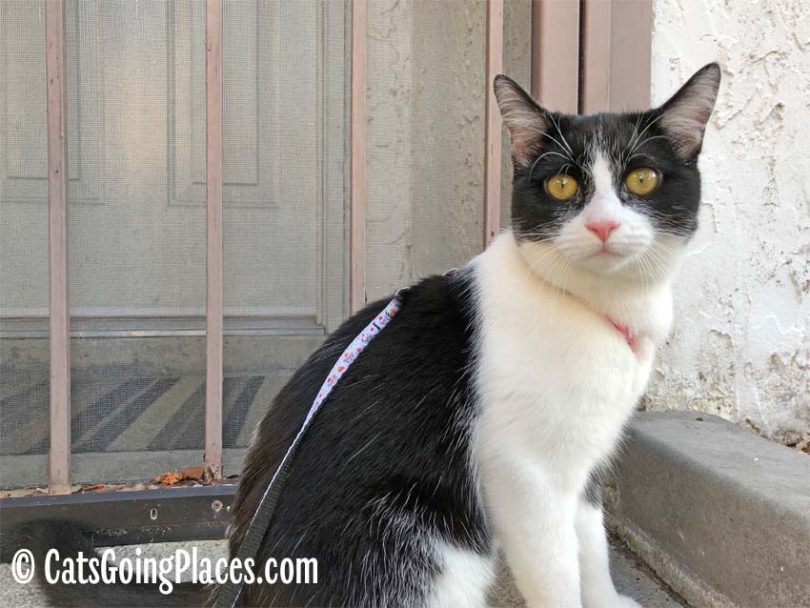 When you have a cat who goes places, you get a lot of the same questions all the time. The questions never get old, because I love the excited look in the eye of people who want to know more about taking their cat with them to pet-friendly locations. Some of the questions I hear most often are below, along with their answers.

Is that a cat?

For real, this is the number one thing people ask. It sounds silly to say it here, but to be fair to everyone who asks, Cupcake’s preference to ride with her paws no my shoulder, facing backward, means the world is really just seeing her black back with a white streak on it. People really might think at first glance that I’m wearing a fur stole.

I’m actually wearing a cat. In Florida. When it’s 85 degrees out. That’s just how Cupcake and I roll.

The other reason I think people say this is that cats going places around town is still pretty new to people, so Cupcake is a cat out of her expected context. When someone sees a small animal on a leash, their mind translates it as what they expect it to be: a small dog. So when they realize Cupcake is not a dog, they say in surprise, “Is that a cat?”

Do you take her with you everywhere?

Whenever I hear this question, I imagine the person asking wonders whether I take Cupcake with me to work and the grocery store like a service animal. I don’t take her to either of those places. Cupcake goes on outings to pet-friendly locations, like the patio at Starbucks and the local hardware store. We’re featuring some of those locations in our Places Cats Go series. 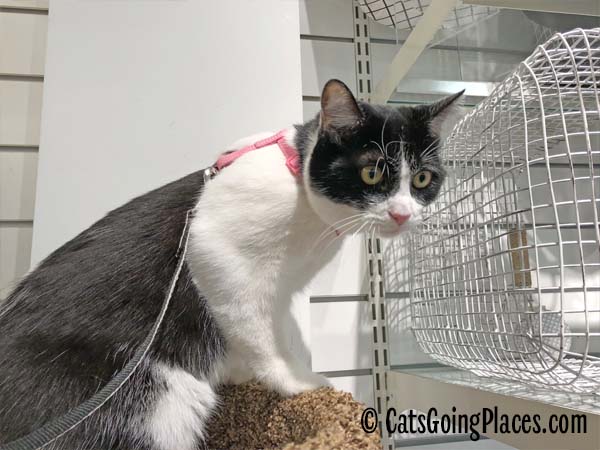 Cupcake doesn’t go everywhere, but she loves to shop at pet-friendly places

How do you get her to wear that harness?

When people ask this question, I can almost see a light bulb over their heads. They usually have an adult cat at home, and they are thinking, “Gee, I would love to be able to bring my cat to the coffee shop on a leash, too.”

Cupcake is unusual in that she has been wearing a harness since she was a tiny kitten during her visit to the BlogPaws conference. I always begin by explaining that first, because starting a cat out by learning things as a kitten is always easier than introducing something new later in their life. We all know cats aren’t into change.

There are adult cats who take to wearing a harness with the help of a little positive reinforcement, but it’s easier if a cat imprints this as part of her behavior in kittenhood.

Is she always that calm?

Cupcake tends to be reserved when we are on outings, especially outdoor ones. It’s pretty obvious to people who know her that she feels like a small cat in a very big world when she is outdoors. As a result, she stays put, often on my lap.

There is a difference between a calm cat and a cautious one, but many people aren’t tuned into the difference when they see it. This is especially true when they don’t know the cat so aren’t familiar with their body language. 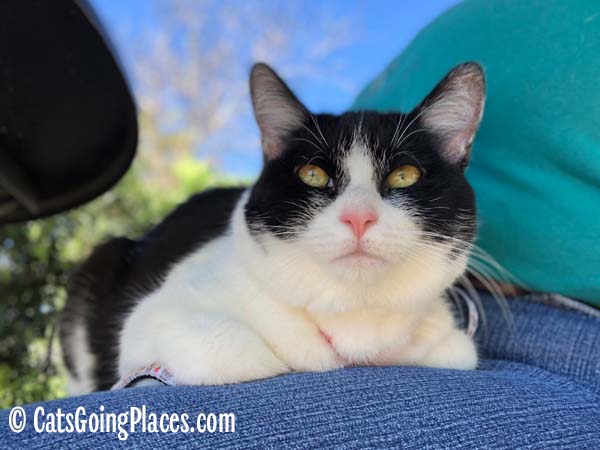 Cupcake enjoys sitting on a lap while she is outdoors

Cupcake is neither calm nor cautious of these at home. I often tell people that she’s just like any other young cat, racing through the house and wrestling with other cats. She is brave and gets into things around the household that none of the other cats ever have, possibly because her experiences outside the home have made her considerably braver than they are.

How often does she go out?

The first time I heard this question, I thought it sounded like a version of “does your cat come here often?” But I think most people who ask are curious about what the time commitment is to have a cat who is as good out in public as she is.

I try to go out with Cupcake at least once a week to some location around town. Recently, I have been trying to get outside with her in my front yard for a few minutes a couple times a week, something she really enjoys. I think the change of pace for our outings has done her some good, since she was starting to anticipate the routine a little too much, and mixing it up keeps her more engaged in the preparation leading up to getting out the door.

It’s easy to forget that not everyone is comfortable around animals. As someone I know who worked at a zoological park used to say, “Anything with a mouth can bite!” 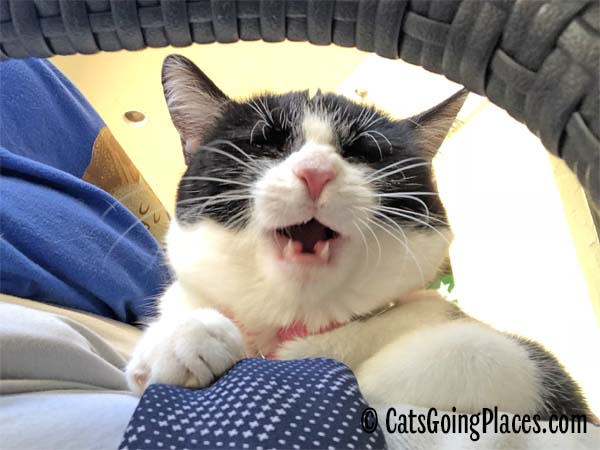 Cupcake is very friendly and seems disappointed when people walk past her without acknowledging her. Like any animal, she can be goaded into biting, but when she bites, it is to tell you to stop what you are doing, like grabbing her paws. She won’t bite if she is able to remove herself from the situation and make the unwelcome behavior stop, so it’s my job to make sure no one does those kind of things to her when we are out and she isn’t free to walk away.

People surprise me with me questions about Cupcake all the time. I’m keeping a running list of frequently asked questions and answers with a little less commentary on our FAQ page, and I’ll update it as people ask different questions. If you have questions, ask us, and we can add those, too!