Many cats who go places live in households where there aren’t any dogs around. An American Pet Products Association (APPA) poll showed that about 1/3 of households have both cats and dogs, leaving a lot of cats, like Cupcake, without regular interaction with a dog.

Cats who don’t see dogs on a regular basis are bound to run into them in the same pet-friendly locations that welcome cats, so it’s a good idea for your cat to know how to remain calm when a dog shows up on the scene.

Cupcake started meeting dogs when she was still a kitten. Kittens accept new things as being a normal part of their universe if they get enough exposure early enough, and dogs are no exception. 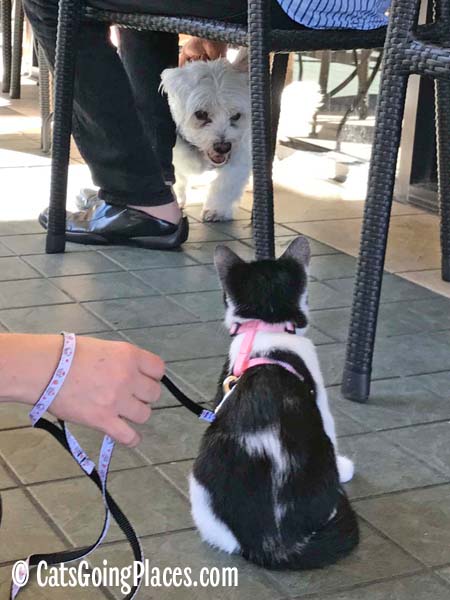 Everywhere we went, I was sure that Cupcake saw the dogs, even if I was carrying her and they didn’t see her. As a result, she watched them with great interest rather than fear. There’s a certain intensity she uses to watch any other non-human animal, and she uses that when watching dogs.

I made it a point to keep Cupcake away from dogs I knew would jump or bark, so her first experiences with dogs were good ones. 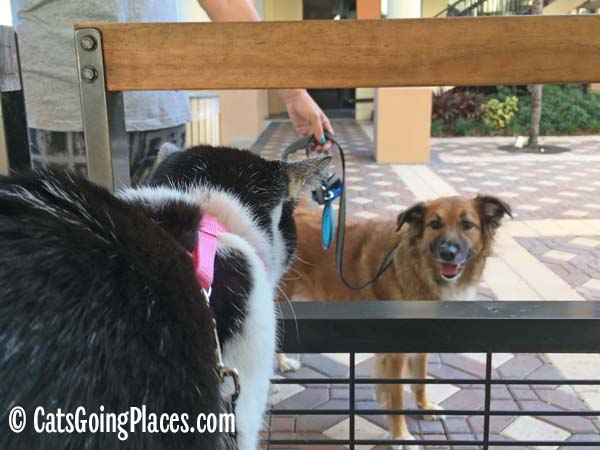 Just like everything else you want your cat to feel good about, offering positive reinforcement with your voice, petting, and treats are all ways to tell your cat what an amazing job she is doing being brave with the dog nearby.

Cats have an extra sense of security when they have elevation to see the big picture of everything around them. They also like to have an exit route in case things go wrong.

Cupcake feels much more secure when she is in a high place. The cat tree at the local big box store, for example, puts her out of the slight line of all but the most persistent dog.

Give Each Other Some Space

Everything doesn’t have to be up close and personal!

Some of Cupcake’s cutest interactions with dogs are from a distance. She watches them intently when they sit with their humans at the other end of the patio at the coffee shop. They watch her, too!

If the dog is far enough away, it’s a good time to try to do some of your usual activities with your cat, like practicing tricks or having a treat. Watch your cat for signs of elevated stress so you know when she isn’t ready for quite as much togetherness while the dog is watching.

Your cat may never become comfortable with dogs. That may be a little inconvenient for you, but it’s okay for your cat to tell you she doesn’t feel safe in a situation. Listen to her and don’t force her into something she isn’t up for.

Sometimes your cat may not like a particular dog for some reason. Cupcake was startled by a dog one day at the coffee shop patio and would have nothing to do with him after that even though the incident wasn’t his fault. If anything, it was the fault of his human who wasn’t keeping the dog close to their side. Regardless, after that, nothing could convince Cupcake that specific dog was safe, and she regarded him with suspicion  the whole time they were both at the coffee shop. 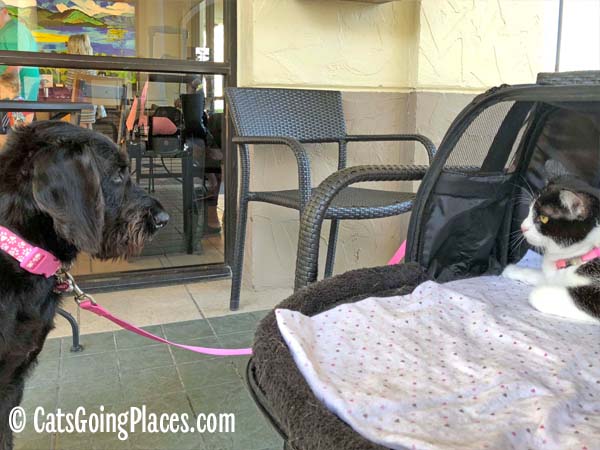 Other times, a dog may not feel comfortable approaching a strange cat. If the dog looks uncomfortable but the dog’s human insists, “It will be okay, he loves our cat at home,” you can still ask the dog’s human not to let the dog approach too close. This prevents an uncomfortable dog from feeling the need to defend himself against the cat.

When you take precautions and always keep your cat’s safety at the foremost of your mind, your cat can be less fearful around the dogs you will inevitably meet on your travels together.