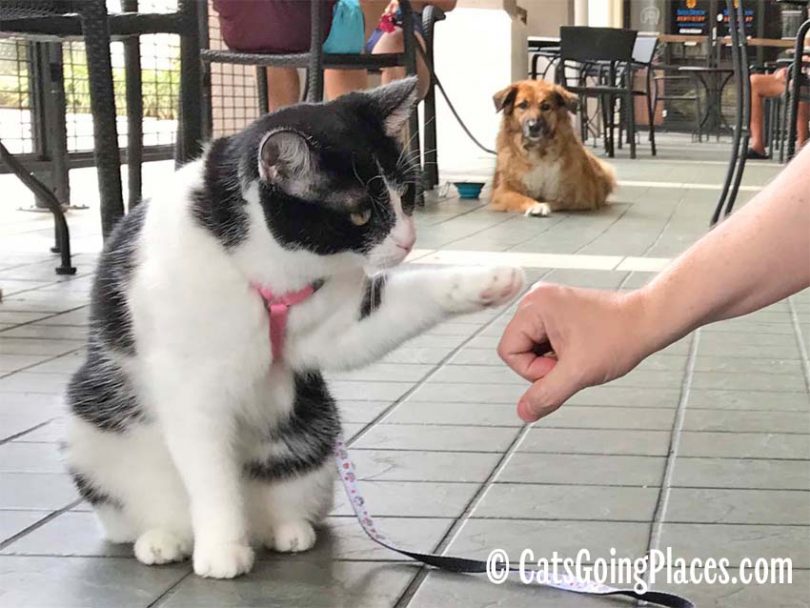 One of the things Cupcake does during her outings is tricks. I have only taught her a couple so far, but they are a great way to  break the ice with strangers and to settle her down with a routine task in a strange place.

Cupcake knows two tricks so far: fist bump, and sit. A lot of cats learn high five, but that’s not a good trick to try in our house, since the rest of the cats already know the open palm with fingers facing upward as the sign for “all gone.” Another case of not knowing many years ago I would want to have a cat give me a high five, so we do fist bumps instead. Besides, fist bumps are cool, right?

To Clicker or Not to Clicker

One of the most common methods people use to train cats — or dogs — is to use clicker training. The concept behind clicker training is using a hand-held sound making device, called a clicker, to tell the cat exactly when she has performed the behavior you are looking for.

The cat is going to get a reward after performing the trick, but you can’t shove a treat in their mouth the exact instant they do the right thing. The clicker just helps the cat understand what they’re being rewarded for. 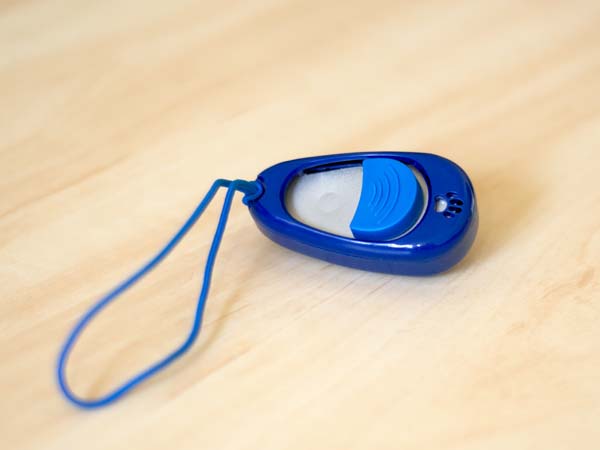 I chose not to use a clicker, thinking I might not have it with me all the time, or I might have my hands occupied and not have one to spare. Instead, I use the word “Good!” to let Cupcake know she is doing the behavior I’m looking for.

Cupcake is incredibly food-motivated, so it is pretty easy to get her attention when there is a treat in my hand. If she could smell a treat, but she couldn’t get to it, she would start pawing at my hand. At first, I told her, “Good!” when she did that, and I turned over my hand and opened it to give her the treat inside.

After she had the hang of doing that, I started asking for fist bumps and only rewarding her when she patted the top of my hand. She caught on to this very quickly. Six or seven sessions over the course of three days, and she was reliably fist bumping. Cats can learn fast when they are motivated!

One thing this has made me notice is Cupcake is very left-pawed. She fist-bumps properly with her left paw, but if she uses her right paw, she often doesn’t touch the top of my hand. I don’t know if she is just awkward with her right paw or what, but it was interesting to see that just like us humans having a favored hand, cats absolutely have a favored paw.

We’re still polishing Cupcake’s ability to sit on command. Teaching sit was a matter of catching Cupcake doing something right and rewarding her for it, too. Rather than holding it in front of her, I held it above her head. I had hoped it would make her sink back onto her haunches, but Cupcake being the little spitfire she is, she stood up on her back paws and grabbed for it. Not what we were hoping for! Thankfully, from that standing posture, she did settle back with her rear end on the floor, and the instant her front paws touched the ground, I said, “Good!”

The test to me of any learned trick is her ability to remember it under stress. The coffee shop patio is noisy and busy, but last weekend, she sat on command there. When she could do that, I figured she probably had the trick learned.

A Quick Sample of Training

I took a quick video of our working on her sit training. When the treats come out in our house, it can get pretty chaotic, and Cupcake does a fairly good job of focusing on the task at hand even though the other cats can try to barge in.

As you can see, we still have some work to do, especially when there are distractions around. Cupcake is motivated and learns fast, and I suspect we can “catch her in the act” of more of her behaviors so she can learn to do them on command in the future. 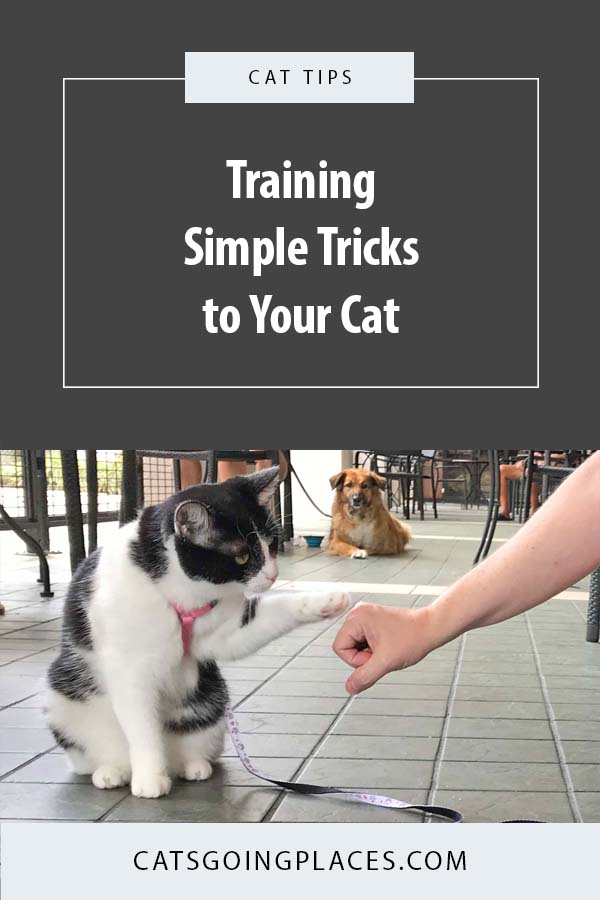