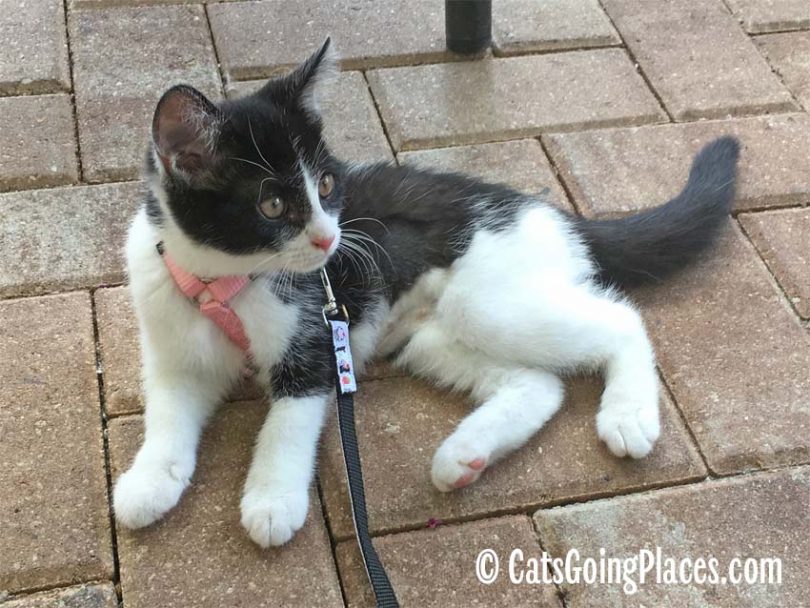 There are a lot of different styles of harnesses a cat can wear, but most of the time, Cupcake wears a simple Roman harness.

There’s not a lot of bulk to a Roman harness. It consists of a piece with a buckle that fits around the cat’s body, roughly around the ribs. Another piece goes around the neck. Additional pieces connect the collar portion to the girth portion and run down the cat’s back and between her legs.

I really like this type of harness for a number of reasons. The first is that it is really adjustable, with both the girth and collar able to be tightened or loosened. Some Roman harnesses even let you adjust the length of the pieces that run along the cat’s spine and under their breastbone to fully customize the fit. Cupcake’s kitten harness was this style, and that allowed it to grow with her while remaining snug, but not too tight. 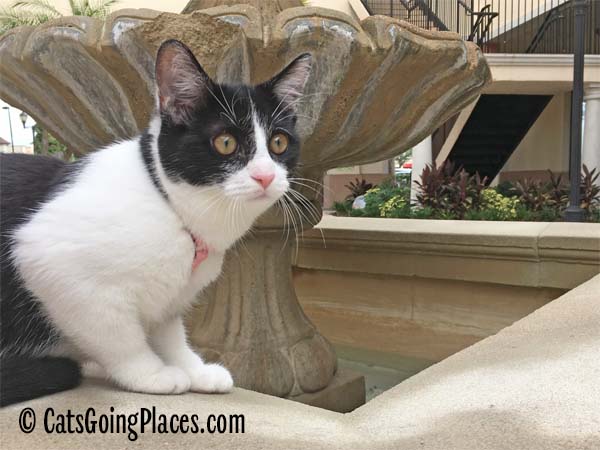 I also like that Cupcake hasn’t been able to get out of the Roman harness. She doesn’t try to get out often, but she did get out of another style harness one day after she chased a lizard behind the garbage can in my front yard. Talk about a scary situation! I think her security in this harness may be because of its adjustability, which you can lose in some other harness styles.

I love that the Roman-style harness doesn’t pull on her neck. The similar H-style and figure 8 harnesses don’t have a piece connecting the collar to the girth under her chest. I’m wary of those because if something frightens Cupcake during an outing and she tries to run, I don’t want her entire momentum stopped by the collar around her neck. The Roman harness distributes pressure across her chest so there’s less likelihood she can be injured.

This cat’s harness doesn’t have a piece that runs between his legs, so when the leash pulls, it applies force directly to his neck. This is not ideal. Photo credit: depositphotos/frantic00

I also like that a Roman harness doesn’t cover more than it has to. This means it’s less likely to pinch or constrict, which is important when Cupcake is in her carrier for an extended time for a long drive or even a flight.

Putting on the Harness

If your cat wiggles at all, putting on a Roman Harness can be more difficult than some of the other styles because when the girth is unclipped, it tends to want to come out of either the top of bottom piece. Trying to keep it in while Cupcake stepped through it and let me buckle it on never seemed to work.

I solve this by not trying to keep the harness girth through both the top and bottom pieces while I’m putting it on Cupcake. Instead, I remove it from the top piece, so it looks like a T through the bottom piece.

The collar goes over her head, then I pass the bottom piece and girth between Cupcake’s legs and wrap the girth around her, sliding one end through the top piece and buckling it, like this:

If this video doesn’t display for you above, you can view it directly on YouTube.

Things to Look for when Purchasing a Roman Harness

There doesn’t seem to be a lot of standardization in how harnesses are named, so some manufacturers refer to a Roman harness as an H style harness. Others sell the harness with no chest piece and call that an H style harness. So be careful when you’re buying that you don’t trust the product name. Take a careful look at all that nylon webbing to be sure it goes where you think it does!

Another inconsistency I have noticed in manufacturing is that some companies have a collar and a girth, with the top and bottom pieces connected by folding over the collar and girth. Better harnesses have the two ends of the collar and the end of the bottom piece meet by connecting all of them to a metal ring. This design lets the harness ride lower, with the ring resting against your cat’s sternum, keeping it well away from your cat’s throat. 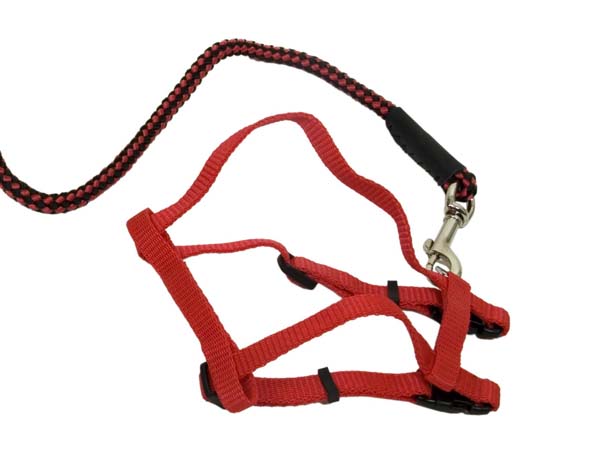 This harness has a collar loop, girth loop, spine piece, and a piece that goes between the legs. It doesn’t use a ring to connect the collar and under-legs piece. Photo credit: depositphotos/penywise

This is a widely-available style of harness. You can find it at most pet retailers, including big-box stores, and it is inexpensive, so it’s a great starter harness for your cat.

Cupcake gives it paws up. Has your cat worn a Roman harness?