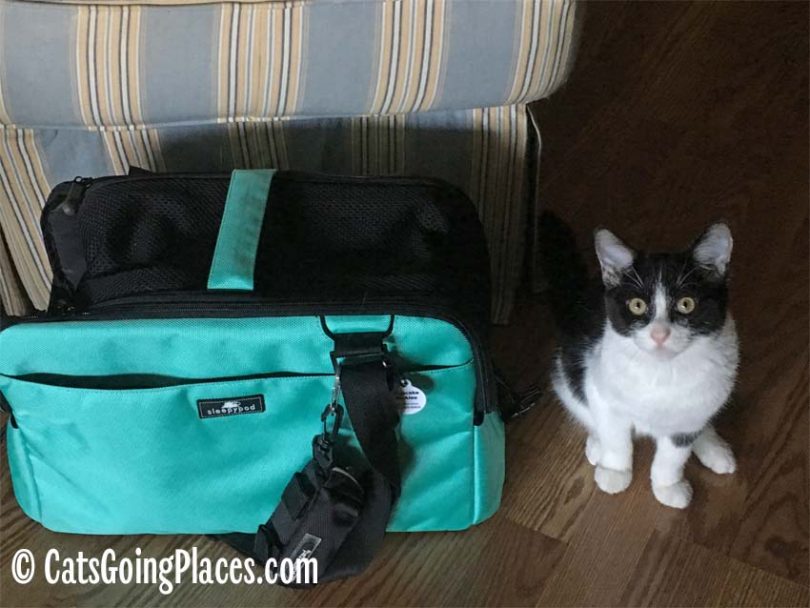 How does Cupcake go places? In a Sleepypod carrier. The Sleepypod carriers are crash-tested cat carriers for cats on the go, but one thing that confused me for a long time is the difference between the Sleepypod Air and Atom carriers. Now that I have both of them in the house, I wanted to help out the next person who can’t figure out which they should get. 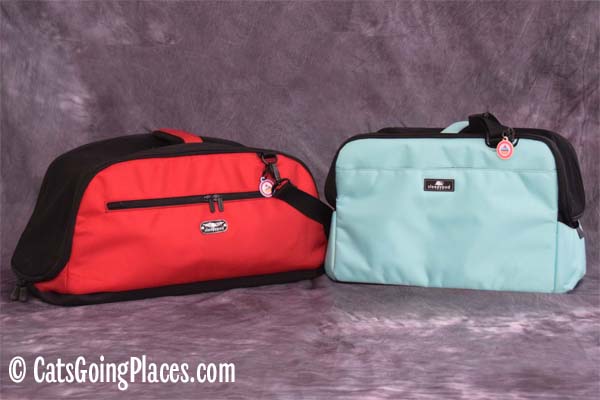 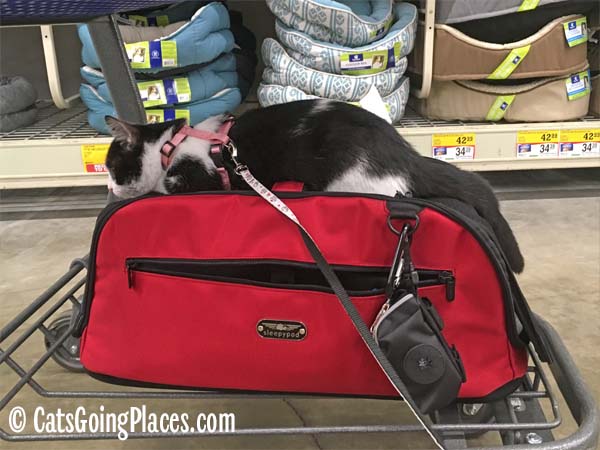 I originally received my Sleepypod Air from Sleepypod years ago to keep as a folding rescue carrier in my car trunk. True to form, as long as there was a carrier in my trunk, I haven’t needed a roadside or parking lot rescue, so it never got used for that purpose. The way it folds really flat is really convenient, though. I can’t tell you how many times I piled groceries or luggage right over the folded carrier. If you don’t feel a need to carry a cat carrier in your trunk all the time, the Sleepypod Air fits nearly anywhere you could want to store it, which is nice if you are in a small place or have limited storage.

When Cupcake flew from Ohio to Florida to live with me, I actually mailed my Sleepypod Air to Ohio so she could travel in it, but I haven’t actually flown with it yet. If all goes as planned, I’ll be flying with Cupcake in April, so I’ll have some firsthand air travel experience with it soon.

I mentioned before that I had the carrier for two years and never realized the ends folded up! I obviously didn’t read the manual very closely. The ends folding up isn’t obvious, and they are pretty stiff. The folded ends of the Air carrier don’t stay up on their own and will fold right back down when the carrier isn’t pressed up against something like an airline seat leg to hold them up, which gives your cat inside the maximum room to spread out most of the time. 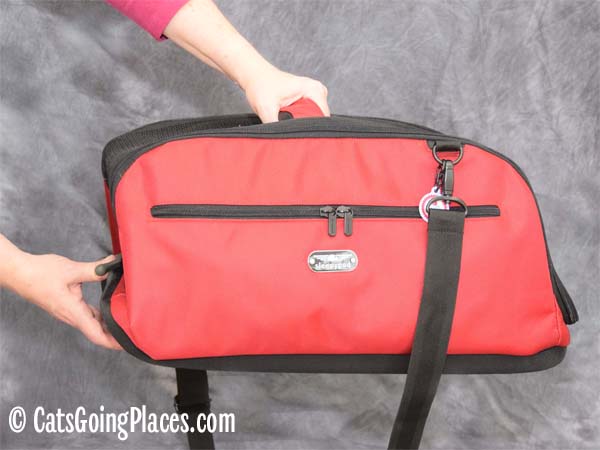 The Sleepyod Air is very plush inside, which is comfortable for Cupcake. I was really surprised on a cool morning when I reached in to pet her and discovered how well it held her body heat around her, considering three sides of it are mesh. When I leave the carrier out at the ready for an adventure, one of my other cats, Pierre, has taken a liking to hanging out in the it because it’s such a cozy spot to nap.

With my confusion about the difference between the two models of Sleepypod carrier, I wasn’t sure I would like a Sleepypod Atom, so I actually got mine used. It had previously been used for one flight transporting a puppy, and the zipper pulls have puppy teeth marks on them.

The Atom is ever-so-slightly taller and narrow than the Air, but it significantly shorter in length. When I first started using it, Cupcake was still very small. Now that she has reached what is close to her adult size, she still fits inside fine. 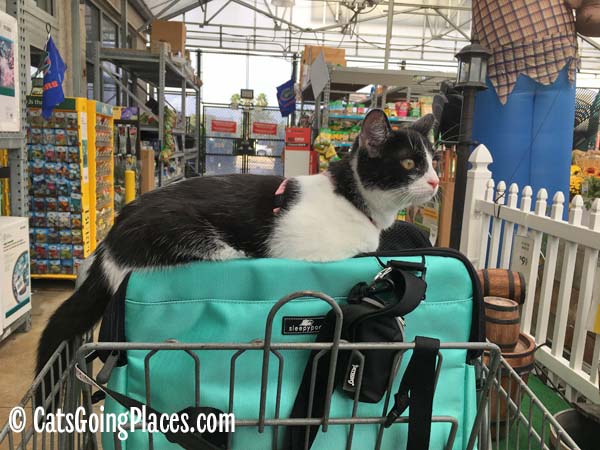 The smaller Atom carrier also surprised me by having more storage than its larger Air counterpart. Both carriers have pockets along the sides, but since the doors on the end of the Sleepypod Air go all the way to the floor, there is no storage on the end of the carrier. The Atom has pockets on each end, and they are super-handy for little odds and ends. I was surprised how much I use them. They became the permanent location for Cupcake’s traveling treats.

The pockets on the ends mean that the mesh does not extend all the way down the sides of the Atom. That means a cat can’t see out while sprawled in the floor of the carrier. But it also makes the carrier feel more private inside, so that may be a bit of a trade-off.

Cupcake is not a large cat. She fits comfortably in both the Sleepypod Air and Atom, but a larger cat might prefer the extra space to spread out in the Air, especially when spending a long day of travel in it.

If your cat needs a little nudge to enter their carrier, the Atom might not be the best choice. The mesh door not extending all the way down the side of the carrier also means if you have a cat who is reluctant to go into the Atom, you have to convince her to step over the end and inside. The Air, on the other hand, allows your cat to walk right in without stepping over the carrier end pocket. 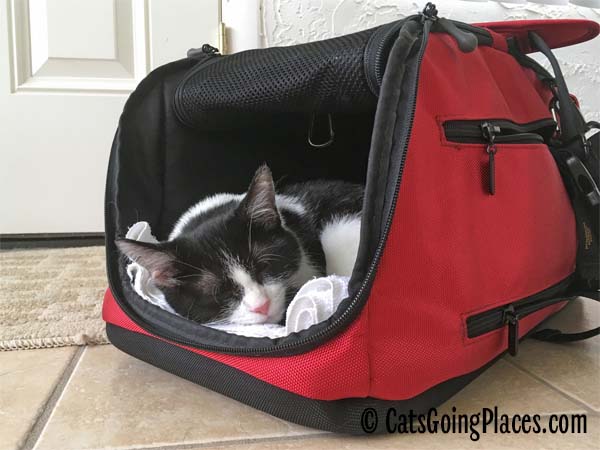 This will probably not be a concern for anyone but clumsy me, but because Cupcake likes to be carried with her paws up on one of my shoulders when we are out shopping, it is sometimes easiest to put the carrier strap over my head and carry it as a cross-body bag. This is where the Atom is so much more convenient than the larger Air. It’s too easy to bump into store displays with the longer carrier swinging at my side.

Another thing I like better about the Atom is that both carriers were designed to be slippped onto the handle of your rolling luggage. Since most of Cupcake’s outings are local, I’m generally carrying Cupcake by the carrier’s handle, and when she goes all the way to one end of the Sleepypod Air, it has a teeter-totter effect of tilting the carrier at an awkward angle. The smaller Atom, while not as spacious for her to spread out, keeps her closer to the bag’s center of gravity, keeping Cupcake from getting too tilted inside even if she curls up at one end.

Both the Sleepypod Air and Sleepypod Atom are great choices for your cat going places. If I had to choose just one, I would want to use the Atom because it is a little more compact and easier to carry in tight spaces for our frequent outings around town. If Cupcake was making frequent long trips, I would probably lean toward the Air. Either is a good choice for a cozy home base for a cat wherever you go together. 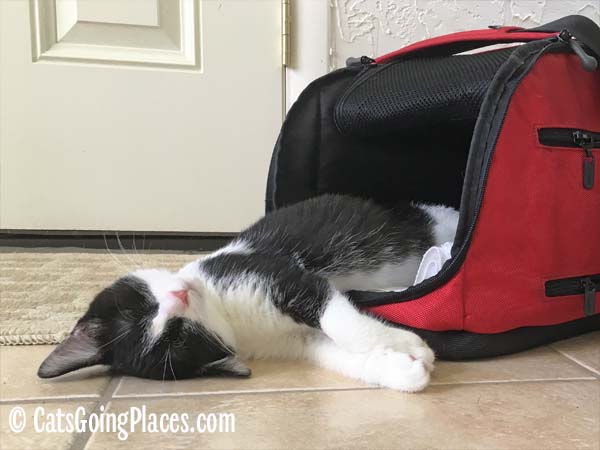 Cupcake was so exhausted from going places, she got this far before falling asleep.

You can get the Sleepypod Air and Sleepypod Atom from Amazon in lots of fashionable colors, and if you purchase through our links, we get a small commission that will go toward Cupcake’s going places.

FTC Disclosure: I received our Sleepypod Air carrier at no charge. This didn’t influence what I said about the product. All opinions in this review are my own and not influenced by any outsider. I receive no additional benefits for talking about the products or company.