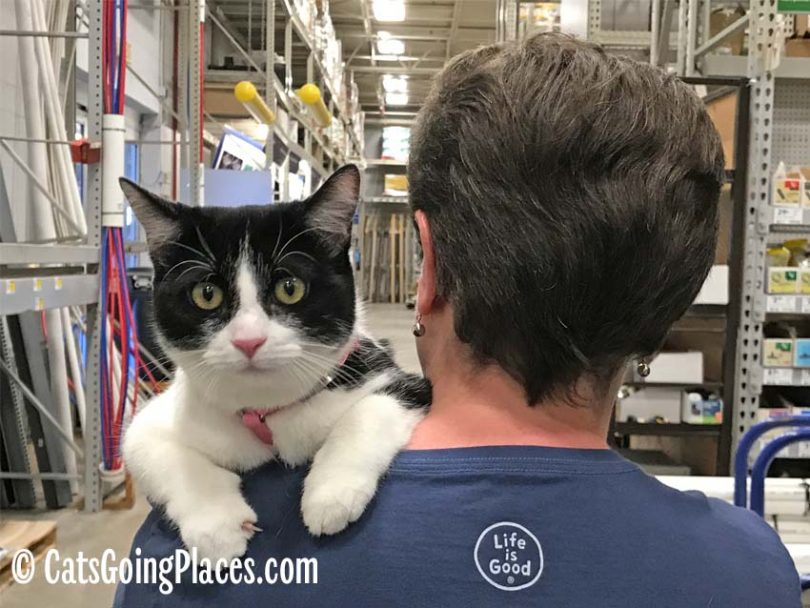 Part of my job as Cupcake’s human is to watch her interactions with humans she meets while we are out so they are safe for everyone and comfortable for her.

Her security has to be my first priority, because I don’t want anything to harm or frighten her. It is also important because a bad experience is something that can linger and sour her on experiences outside the house entirely.

When she was first making outings, this was fairly easy. She preferred to ride on top of her carrier in the shopping cart. 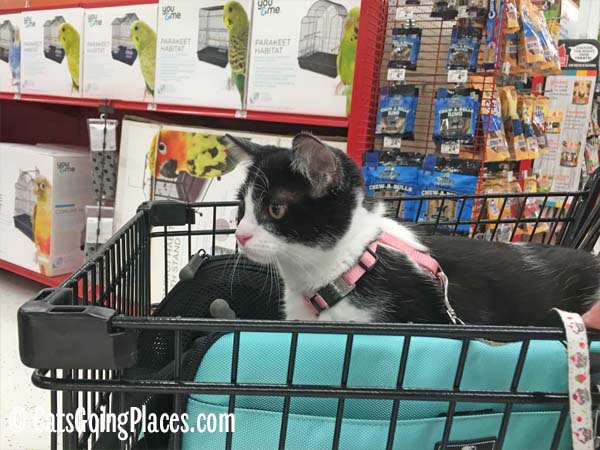 Riding on the carrier gave her a great view of everything in the store. It also allowed me to watch over her as people approached so I could supervise their interactions.

Plus, it’s an awesome perch for checking out the birds at the pet store. Sounds like a win all around, right? 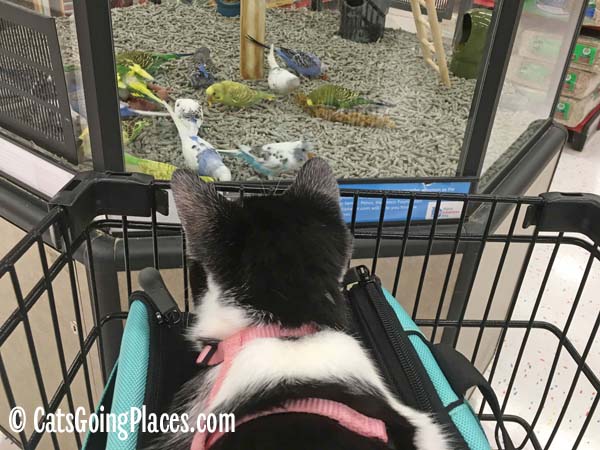 As Cupcake got older, she decided she was done with riding on the carrier. Part of this might have been her size. She was getting bigger, and laying across the handle of her carrier might not be comfortable any more as she got heavier.

Part of her lack of interest in being on the carrier may have been the increasing number of dogs in the pet stores on weekends as the winter began. Being at cart level got her nearly at eye level with some of them.

At any rate, Cupcake was done with cart riding. The princess wanted to be carried, and she would climb up onto any convenient family member to rest her paws on their left shoulder. That’s her shoulder, and she doesn’t want you to ask her to be on your right side. 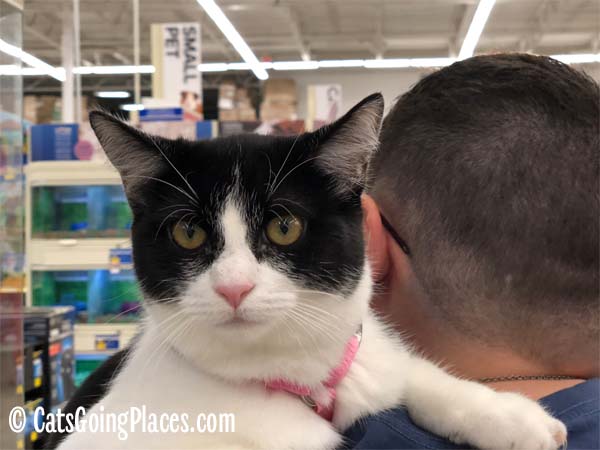 Cupcake is so determined to ride this way that she sometimes leaps directly out of the carrier and onto your shoulder, which scared me the first time she did it. You don’t expect a cat to come flying out of the carrier when you unzip it, but that is exactly what happened.

She isn’t quite that reckless when leaving her carrier, usually preferring to look around before she comes out, but Cupcake still does this every once in a while. I managed to catch it on video one weekend at the pet store. If you are on a mobile device and the video below doesn’t display, you can view it directly on YouTube.

Now that we knew Cupcake’s preferred mode of travel when we are on outings, it was great. She rode along contentedly, checking out everything in the store as we went. With her body against mine, I could feel if she tensed up because something alarmed or upset her, so I could reassure her or leave the situation, as needed.

Then we discovered the cat-loving shoppers who really wanted to pet Cupcake and didn’t ask first. Some of them saw her dangling paws as an invitation to touch or grab them, and since this was happening behind my back, I didn’t always know it was about to happen in time to keep Cupcake away from those grabby hands. If strangers grab Cupcake’s paws, she tries to defend herself, and we don’t want that to happen.

We were at an impasse. Cupcake didn’t want to be carried any other way, and I couldn’t grow eyes in the back of my head.

I started to wonder how to tell people to ask first. I discovered that a company makes labeled harnesses mostly intended for dogs, but none of them really said what I needed. “Friendly” and “Do Not Feed” were the closest messages they carried, since “Ask Nicely First” and “No Grabbing Paws” are apparently not high-demand messages.

Then it occurred to me that maybe Cupcake didn’t need to be the one who was wearing the message at all. If I could put a message over my shoulder, the one shoulder she absolutely insists on resting against, she could then sit on that.

So I looked for ways to personalize something for her. I ended up with a burp cloth, which is the right size, since it is intended to be thrown over your shoulder. I contacted Busy Bee Stitches on Etsy to work up a personalized burp cloth just for Cupcake. The shop owner, Brenda, was great to work with, and the result was Cupcake’s very own sign cloth saying exactly what other shoppers in stores need to know. 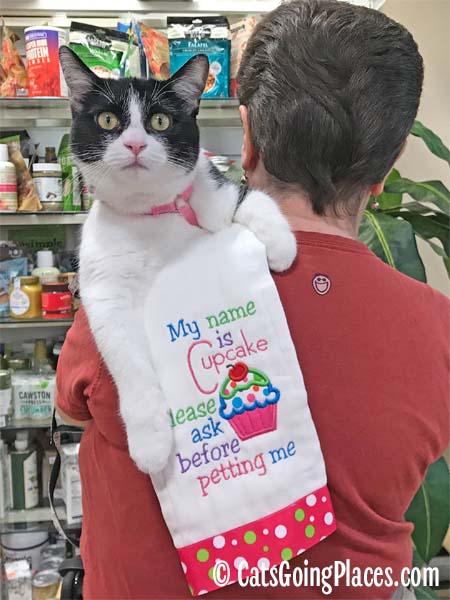 One of the unexpected benefits to cupcake’s sign cloth is that more people speak to her and want to interact with her when she is using it. I think it lets everyone know that she is “open for business” for attention when people might otherwise have assumed she was not to be touched.

Best of all, no one has tried to grab her paws while she was resting them on a sign cloth that says “ask before petting me.” Cupcake’s sign cloth is a big win all around!