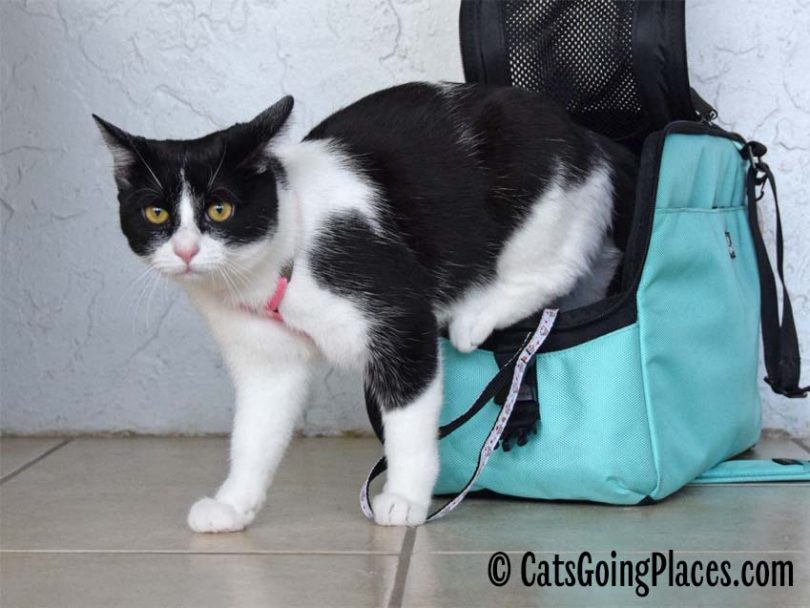 Even cats who love going places can have a hard time getting going. Preparing a cat and getting her out the door is sometimes a little bit like like getting a teenager out of bed on the weekend.

After taking Chanel out at least once per weekend for a while, you would think that getting OUT of the house would be easy. I mean, it should be:

Around here, it is more:

She will come right over and check things out, but gets squirmy about the harness and then put in the carrier and shoved in far enough to close the door. It was even worse the other day when I put the harness on her…then realized that I had it upside down. I had to take it off and put it BACK on her. Oh the complaints. She doesn’t put up a fight – she is more than willing to let me put it on. But she has lots of things to tell me about the process.

That said, once she is in the carrier and the car and we are off to go places, she is great. She really doesn’t mind being in the carrier in the car. Last weekend we went through the drive through and she sat up in the carrier to see if she could see what everyone was doing inside the Starbucks. She doesn’t mind people coming up and talking to her and petting her.

But getting going….she haz complaints.

Unlike Chanel, Cupcake doesn’t usually complain aloud about the process of putting her harness on. She just chooses not to help.

Anyone who has a cat has at some point found out they have the ability to melt into a boneless puddle of fur. Cupcake often does this at harness time, looking charmingly up at me as if to say, “Aren’t I cute?” 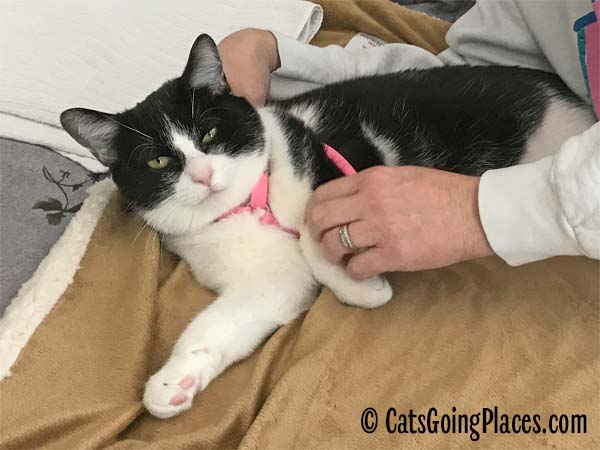 On one hand, I’m glad she doesn’t struggle against my putting on the harness. On the other, it’s hard to get the harness properly onto a furry mass of jelly. The times she does this have a much higher chance of my making a mistake like buckling her elbow uncomfortably inside the harness instead of getting it tucked behind her elbow because she passively lets me wrap it around her incorrectly.

There’s a much higher chance of her pulling the noodle act if I interrupt her napping to begin the routine to go out. Unfortunately, she’s a cat, so she sleeps 18 hours a day. That makes my interrupting her nap very likely except for early morning or evening, times we don’t usually go anywhere. I’m getting a little better at buckling it correctly on her on the first try like this. Or the second.

Cupcake’s passive resistance doesn’t end there. After putting her harness on, Cupcake gets one last visit to the litterbox. There have been a couple times when she didn’t come back out after taking care of business. When I went to check what was going on in the litter box, there was Cupcake, sitting in her litter and practically picketing, “Cat, no, I won’t go!” 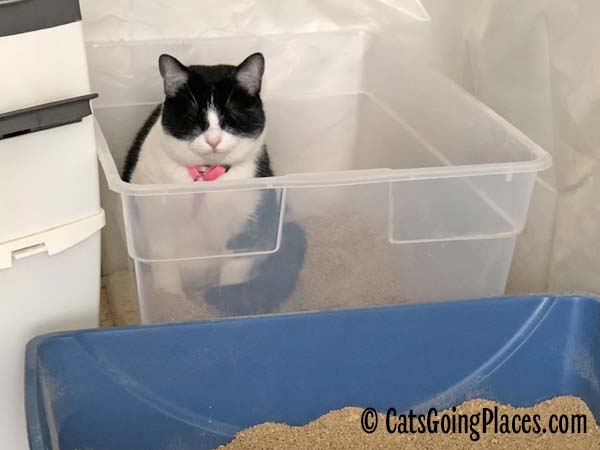 I was worried about this behavior, since cats sitting in their litter can be a sign of a medical problem or of stress. In her case, it was a sign that she didn’t like that I had made a habit of grabbing her up right after she left the litter when she had her harness on. Giving her a moment after she comes out has kept her from doing this again.

After Cupcake’s litter box visit, I attach her leash and tuck her into her carrier. Cupcake doesn’t complain about going into her carrier, but she doesn’t like to sit around in it. Once she is in, she’s ready to go if we are going, and will complain if I haven’t gathered her bag and other necessities ahead of time.

Every time Cupcake stages one of these little protests, I ask myself whether she’s telling me she doesn’t like going on outings, since I don’t want to force her into something she doesn’t like. But like Chanel, Cupcake genuinely enjoys being out once she gets there. She loves to interact with the strangers she meets on outings, too. She just needs a little help getting moving, like the teenager she is.