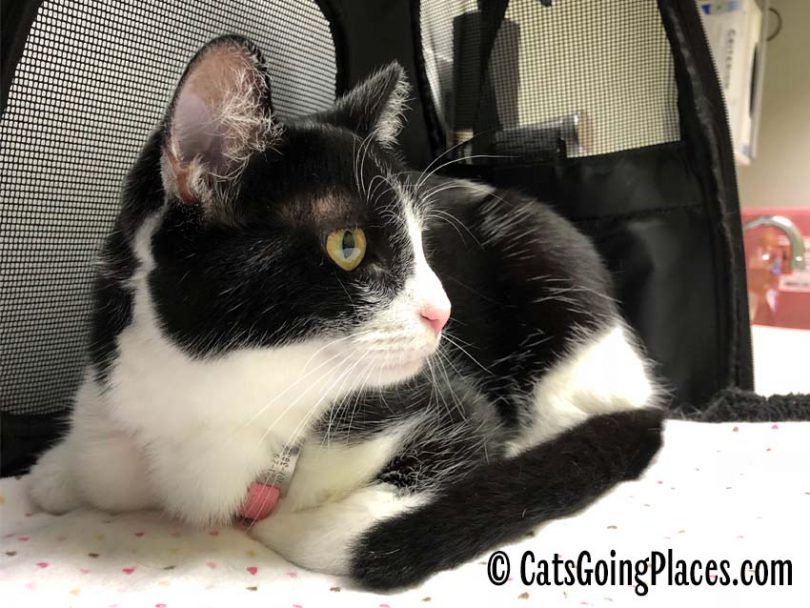 Occasionally, even a seasoned veteran of a traveling cat may have a difficult outing. A scary vehicle passing at the wrong time, a loose dog, or something else you encounter may be enough to rattle a cat into being uncomfortable with going out again.

It’s up to you to help your cat recover from a difficult outing so she can have a positive attitude about going out to visit places beyond your doorway.

For a cat who likes going out, there’s one place she really doesn’t like: the vet’s office. To be fair, she doesn’t mind the vet’s office itself. During a recent vet visit, she happily crawled out of her carrier and explored the lobby, looking out the plate glass windows at the scenery outside.

Unfortunately, Cupcake isn’t a fan of getting an abdominal exam, which is part of a standard checkup. So she was already grumpy. It also turns out she is really, really not a fan of needles. This was a problem, since she was due for her year-old booster shots.

Vaccinating Cupcake was no fun for anyone. She resisted so much that she managed to make her veterinarian puncture herself with the needle. Her vet then bled on her, which meant that an already-angry Cupcake had to be cleaned up. It was a bad scene all around.

Even worse news for Cupcake, she also needed blood drawn in preparation for her upcoming dental procedure, but she was so upset from her vaccinations that she wasn’t having any more needles. No way. We agreed it was best for Cupcake to take a mild sedative and return on another day. So Cupcake had to come back for her blood draw. 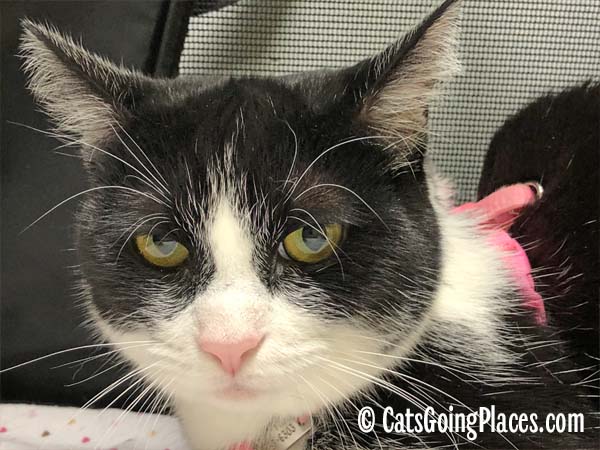 Then she had to come back again for her actual dental procedure.

All told, Cupcake didn’t just have one difficult outing, she ended up with three of them to the vet in a space of a couple weeks. I was seriously worried about her not wanting to go out after that. Who would blame her? If I had to go to the doctor that many times in a row and no one could explain it to me, I would be wary of leaving the house, too.

What We Did About It

I knew that the only antidote to Cupcake thinking that every time she left the house, it would end up at the vet was showing her that isn’t true. There’s no way to explain that to her, so she would have to see it for herself.

She knows the routine on weekend mornings, and she was lounging in the window on Saturday morning when I went into my closet to get dressed. When I came out, there was no Cupcake to be found anywhere. She was under the bed.

Everyone who has had to take a cat to the vet and had them hide knows how it feels to have to decide what to do about a hiding cat. I knew if I didn’t get her out from under there, she wouldn’t see that everything was back to normal and the destination wasn’t the vet. So I moved the bed. She ran out of the room.

When I returned to the sunroom, she came right up to me, not hiding any more, so we started her going out routine as if nothing unusual had happened. I put on her harness, then set her in the litter box to take care of business. Then we were off!

Her friends at the coffee shop patio greeted her the same way they always do. And of course, she got the good stuff. 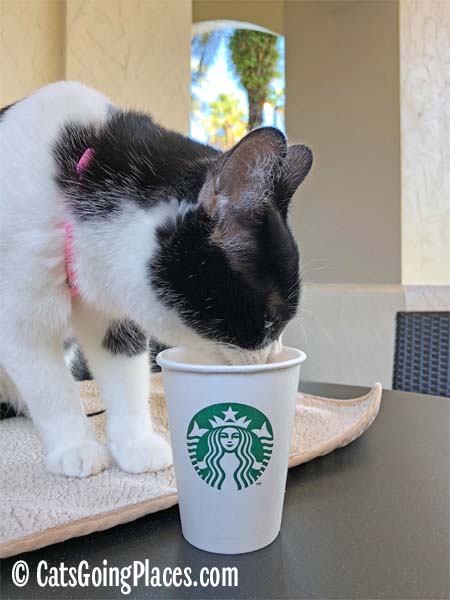 She started to relax. She even met one of of our readers who happened to stop by that morning. Maybe this wasn’t so bad after all.

Afterward, we made a stop at the local big-box pet supply store. Cupcake let me carry her until we were within sight of the cat trees, then she wanted to jump down so she could walk the aisle to get to them. She found a favorite model and climbed right up. 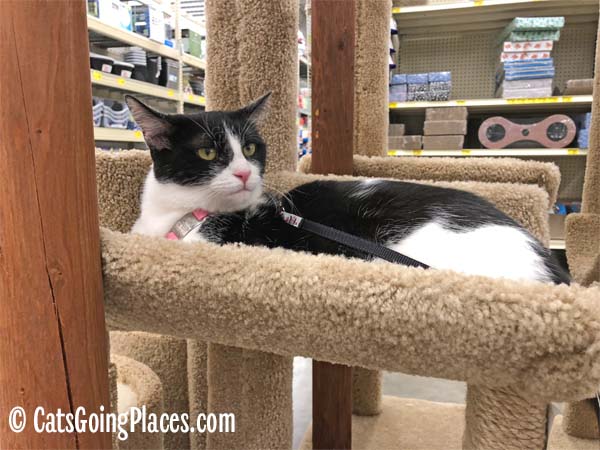 When it was close to time to go, I went into my closet to get a change of clothes, knowing that it was a signal to Cupcake that we were going to be leaving soon. When I came back out, I wasn’t sure what to expect. This is what I saw: 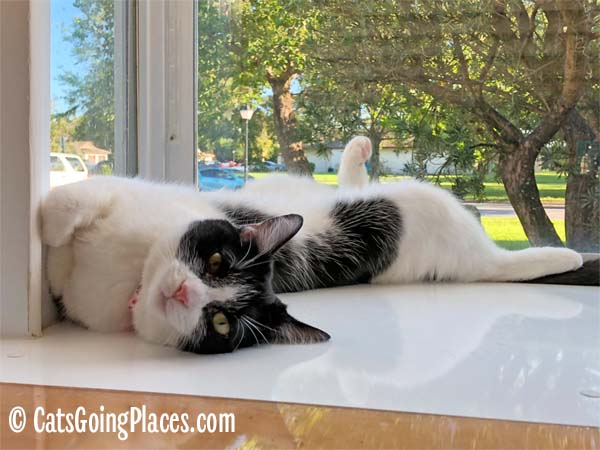 Showing Cupcake that every outing wasn’t going to end up in her being poked and prodded had been enough to reassure her. I’m really relieved to be able to say that she will be able to continue to have fun, enriching outings. 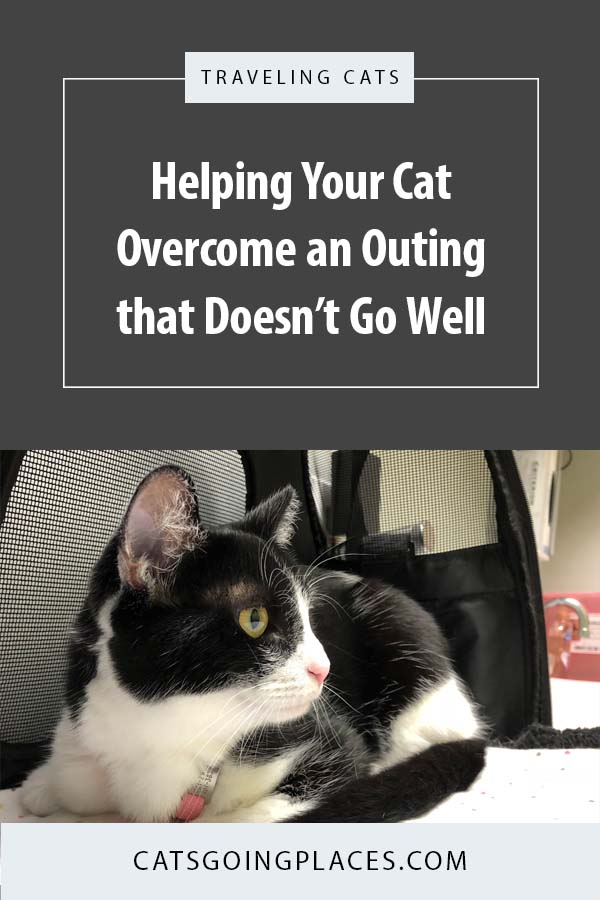